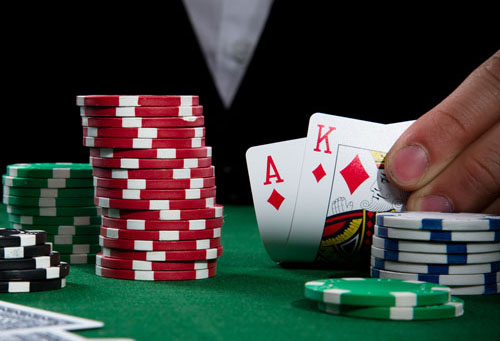 Like most addictions, gambling addiction is a state where a person continues a certain behaviour to a harmful extent without being able to stop themselves from continuing. Whilst some levels of gambling (like some levels of alcohol consumption) can be perfectly enjoyable and socially acceptable, an excess of gambling can lead to addiction. Defining the point where a person considers themselves addicted can vary from regularly spending more money than one originally intended, to gambling away everything a person owns. Gambling Counselling is a proven an effective treatment for problem gambling.

A person affected by gambling addiction may exhibit some, if not all, of the following symptoms:

•  Regularly gambling more money than originally intended, or losing control over the amounts gambled.
•  Losing control over the amount of time spent gambling.
•  Incurring debts to gamble.
•  Hoping and playing for the “big win” to solve the debts created by gambling.
•  Inability to stop gambling altogether.
•  Depression, sadness or moodiness as a result of not being able to gamble.
•  Boasting about winning to relive the excitement whilst denying or playing down losses which may, in fact, exceed the winnings.
•  Gambling in preference to other social events.
•  Neglecting friends, family and work to gamble.
•  Lying about gambling to hide losses.


Like other addictions gambling can be treated with professional counselling therapy as is commonly provided by registered Counsellors, Psychologists or Psychotherapists.

If you are unable to afford paid treatment, you could also contact the University of Sydney Gambling clinic who offer free treatment.

Steven and Lizzie met at university and after a significant courtship, they married and had two children. From the beginning of their relationship, Lizzie was aware that Steven liked to place bets on football games and never objected to what seemed like a harmless recreational activity. At the time, Steven only bet small amounts of money, but after some time Steven developed a dangerous and compulsive gambling habit that he was practising without his wife’s knowledge.

Steven was no longer satisfied with gambling a small amount of money and soon found himself betting thousands of dollars on games. Given this out of control behaviour, Steven found himself approaching bankruptcy as he certainly no longer had the money to cover his bets. He began to borrow money to feed his addiction, sending his family further and further into debt. (This article is electronically protected – Copyright © Associated Counsellors & Psychologists Sydney PTY LTD)

The stress of Steven’s approaching financial ruin, as well as his efforts to keep the extent of his gambling problem hidden from his wife, began to place significant stress on his relationship with Lizzie – trivial things triggered massive arguments and Steven was often morose and disconnected. Meanwhile, Lizzie began to suspect that Steven was having a problem because he would refuse to talk to her about finances and would become angry and defensive whenever she attempted to broach the subject. Whenever she tried to discuss how frequently he was going to football games or remarked on how he became angry and anxious when watching the games, she and Steven would have a fight. She became conscious of the fact that something bad was happening, but she found it impossible to have him open up to her about his problem or to confront him without exactly knowing what the problem was.

One day, Lizzie opened a final notice on their mortgage repayment, which was long overdue and consequently she became alarmed. It was Steven’s responsibility in the house to ensure that he paid the bills on time, and they had never had a problem with mortgage repayments to date. In fact, his salary was now much more improved than when they had first bought the house and their expenses should have remained roughly the same. Why wasn’t he making the repayments on their home and where was all their money going? When she finally confronted him about it, he had no choice but to confess to her his gambling activities and how he was waiting for that one big win to change their luck around. Lizzie demanded that Steven seek professional help from a psychologist who specialised in gambling addictions. She managed to convince him that his gambling might be a problem because until now he had been telling himself that he was in control of his compulsive behaviour. However, she pointed out that his behaviour was affecting not only himself but was jeopardising their marriage and the security and safety of their children as well. Reluctantly, and not entirely convinced he had a problem, Steven agreed to Lizzie’s request and made an appointment with a professional counsellor specialising in gambling addiction.

When Steven met Jerry for the first time, he was surprised to find that he quite liked the counsellor. Jerry seemed quite down to earth, non-judgmental and understanding. He seemed genuinely interested in what Steven told him about his life at home, work and especially about his gambling habits. Counselling and addiction therapy was entirely unlike what he expected they would be and were certainly far more productive for him than talking to Lizzie about losing money, who would become understandably emotional. Jerry did, however, seem to agree with Lizzie that Steven’s gambling was causing him serious problems, but he didn’t press Steven further when Steven seemed unconvinced that gambling was a problem for him. (This article is electronically protected – Copyright © Associated Counsellors & Psychologists Sydney PTY LTD)

Over the course of several weeks, Jerry worked with Steven to better understand the impact of gambling on his life. Speaking to Jerry, Steven came to appreciate that Jerry had treated many clients who were just like him: hard-working people who lost all their earnings and accumulated great debts trying to chase that one big win. After a month of regular therapy sessions with a trained counsellor, Steven conceded that what he had was a problem and a destructive addiction to gambling.

In the three months that Steven attended counselling sessions, he came to understand that gambling had substantially negatively impacted on his life, and that it had placed his marriage, his family and home in jeopardy. With his counsellor’s help, he learned new ways of dealing with the impulse to bet on football games, races or other things that could become destructive to the things he valued. (This article is electronically protected – Copyright © Associated Counsellors & Psychologists Sydney PTY LTD)

Working with a counsellor, psychologist or therapist for gambling addiction can illuminate the problem for many individuals. Often, problem gamblers do not seek treatment until substantial damage has been caused by their addictive behaviour. One of the hallmarks of addictive behaviours is to continue with these despite negative consequences. For gamblers in particular, the negative consequences can be significant and include job and/or home loss, as well as the breakdown of primary relationships.

Counselling for gambling addictions often involves examining the behaviour and identifying what triggers it. The counsellor is interested in learning about the individual and finding out what is motivating the gambling. The way counsellors, psychologists and therapists help problem gamblers is by investigating and addressing the underlying causes of the addictive behaviour, as well as recommending practical solutions to avoid gambling activity. (This article is electronically protected – Copyright © Associated Counsellors & Psychologists Sydney PTY LTD)

Where can I get help for gambling addiction?

If you or a loved one is struggling with gambling, you may benefit from talking to a qualified and professional counsellor, psychologist or therapist. If you would like to schedule a consultation or receive further advice, please contact us at:

Looking for help with gambling. Our Sydney counsellors can help with one on one therapy. Call us or go to our bookings page and fill out an enquiry form.

We do charge for our services, but getting help for your gambling is an investment in your future. If you can not afford a fee, contact the University of Sydney Gambling clinic.

Gambling and betting addictions can destroy lives, relationships, careers and homes. With the help of professional psychologists and counsellors in Sydney you can break the destructive cycle of gambling addiction.