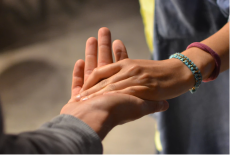 Living with the prospect that you might at any moment again experience such sudden and intense fear, can lead to anxiety or worry about when the next episode of panic will come. You may feel yourself always ‘on edge’ hoping to avoid another panic attack. Perhaps you have become afraid of certain triggers like elevators, or driving or getting on a plane?

The experience of a panic attack

People who experience panic attacks often describe their heart and temples as pounding, you may find yourself covered in sweat, feeling faint or weak at the knees and you may feel tingling in your fingers or hands. Many people describe chest pains and for this reason people may understandably confuse a panic attack with a heart attack or stroke.

When panic strikes, most people fear that they have lost control, that everything is doomed, that things are not quite real, or even that you are losing your mind or about to die. For most people panic attacks last for a couple of minutes; but they can continue for longer.

Panic disorder is a set of symptoms which includes panic attacks over a period of time. We will discuss the diagnosis in a moment. It is known that panic disorder is quite common, more so in females. Some people may only experience a single panic attack in their life; others go on to develop the disorder. The usual most common age of onset is believed to be in adolescence.

Counselling therapy by a counsellor or psychologist can be an extremely effective treatment for panic disorder and early intervention is best. Left untreated, panic can interfere significantly in your life.

Some people find that their panic attacks are triggered by particular circumstances and if untreated, this can lead to avoidance of certain people, places or experiences, in extreme cases leading to the development of a phobia. Perhaps you have become sensitive to elevators, planes, escalators, shopping centers or boating? Maybe you no longer leave the house, or need someone to come with you when you go to a feared place? About 30% of people with panic disorder begin to fear leaving their house, which is known as agoraphobia. You can read about this on a separate page. Treating panic disorder is effective in limiting the progression to agoraphobia.

For other people, their panic may also occur alongside other conditions, such as depression or alongside alcohol abuse or addiction. Or, they may be able to confront a feared situation only if accompanied by a spouse or other trusted person. Basically, they avoid any situation they fear would make them feel helpless if a panic attack occurs.

The symptoms of panic disorder

Panic Disorder in the experience of having repeated and unexpected Panic Attacks. As we discussed earlier, panic attacks are usually short periods (between a minute and an hour) of truly intense fear or discomfort. Also, the following four (or more) symptoms must come on quickly and peak within about 10 minutes:

For a formal diagnosis of panic disorder you must experience,
• palpitations, heart pounding, or an accelerated heart rate
• perspiration / sweating
• shaking or trembling
• a shortness of breath
• a sense that you are choking
• some chest pain or discomfort
• a feeling of nausea or abdominal distress
• dizziness, unsteadiness, or feeling lightheaded, or faint
• derealisation (feelings of unreality) or depersonalization (being detached from oneself)
• a fear of losing control or going crazy
• a fear of dying
• numbness or tingling
• chills or hot flushes

• worry about having more attacks
• concern about the consequences (elike a feeling that you are having a heart attack, or are going crazy)
• noting a change in your behavior related to the attacks

You should also rule out that the attack has not happened because of drug use or another general medical or mental health issue.

Panic attacks and panic disorder are some of the most awful experiences to live with. Yet counselling therapy provided by a professional counsellor or psychologist can provide significant relief in most cases.